Raising the bar! Rye Hotel gets a makeover during COVID-19 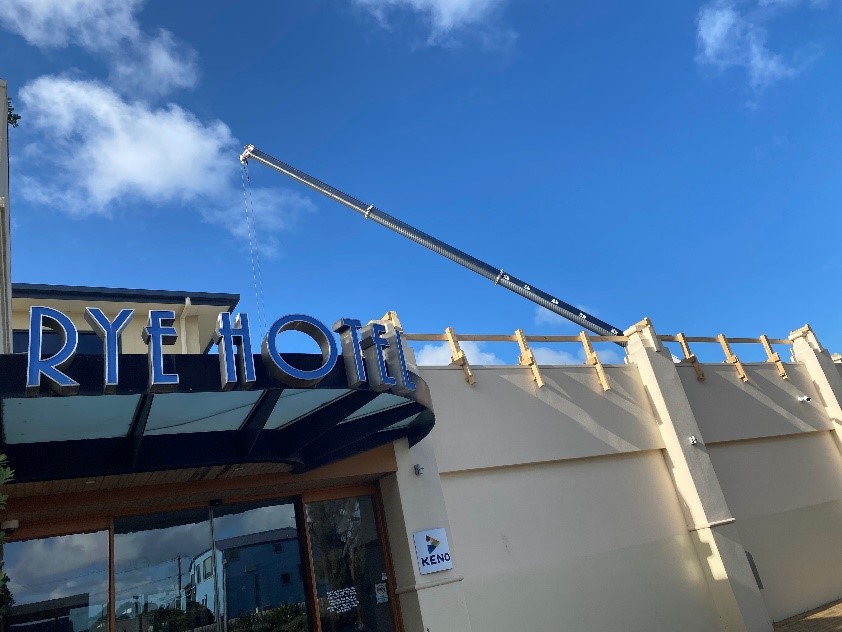 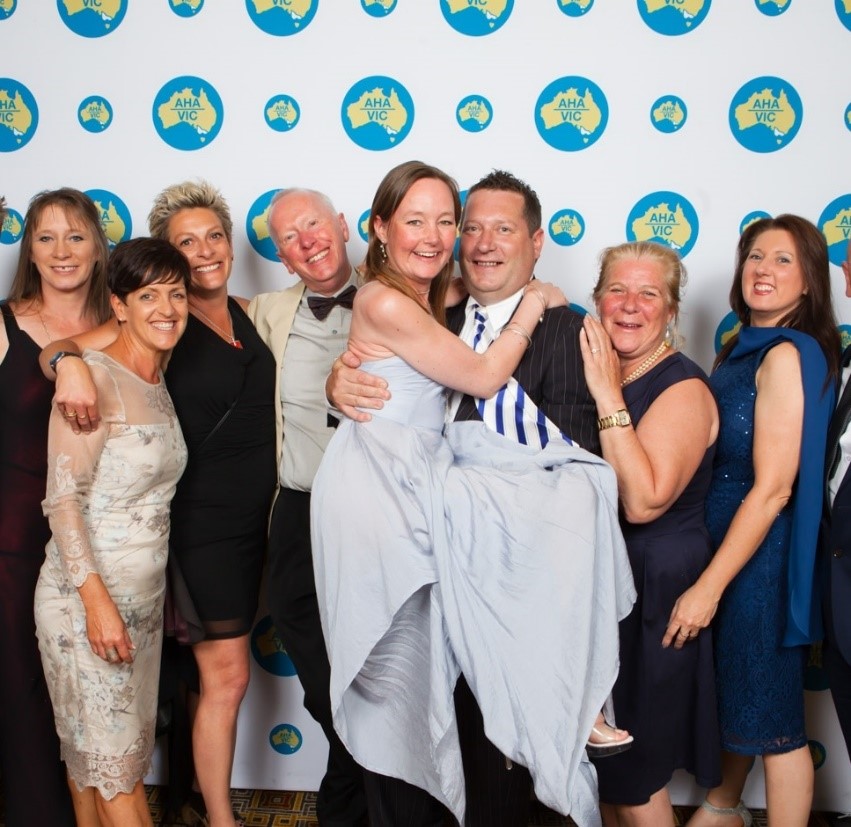 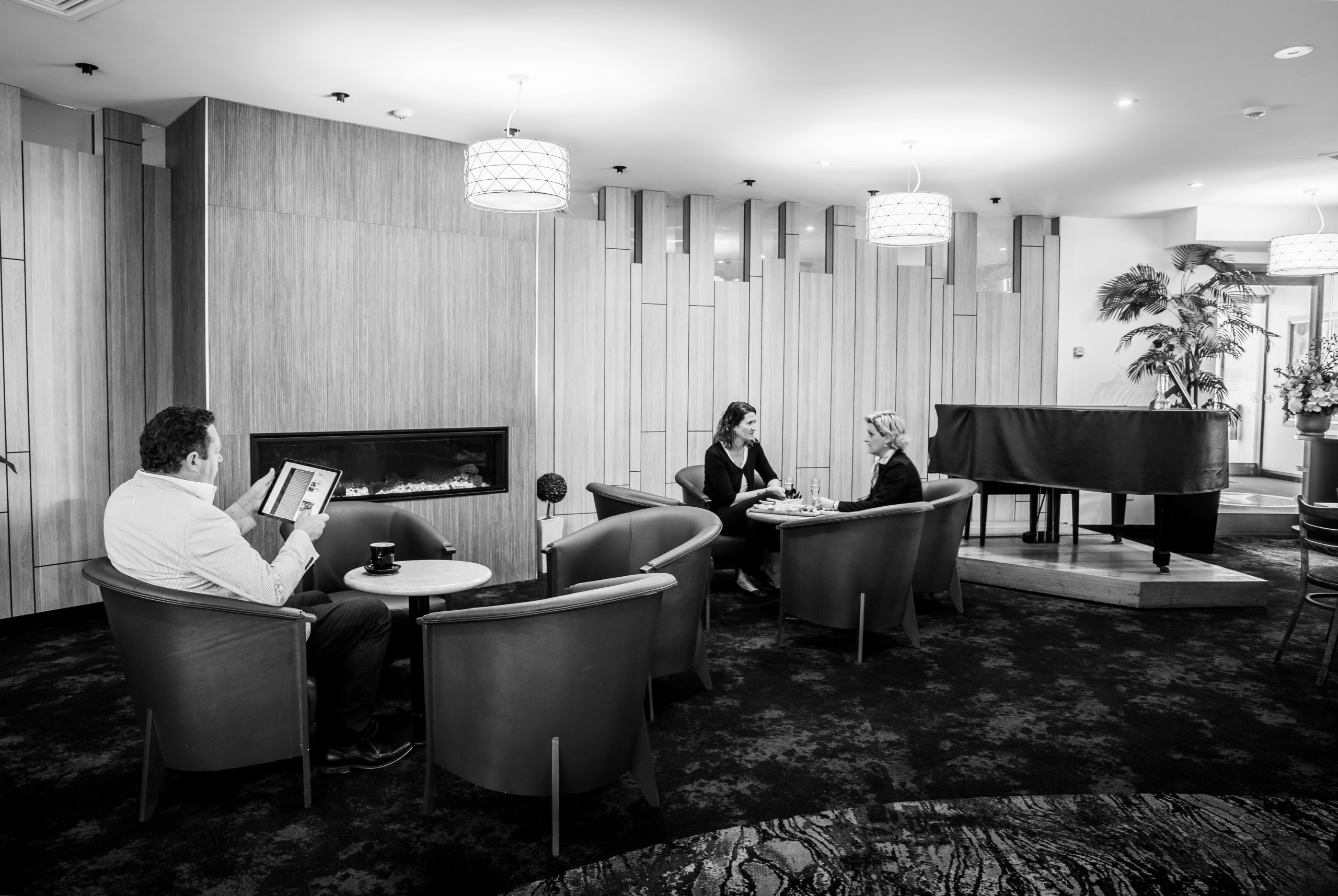 Enjoy a drink or coffee with a friend by the fire 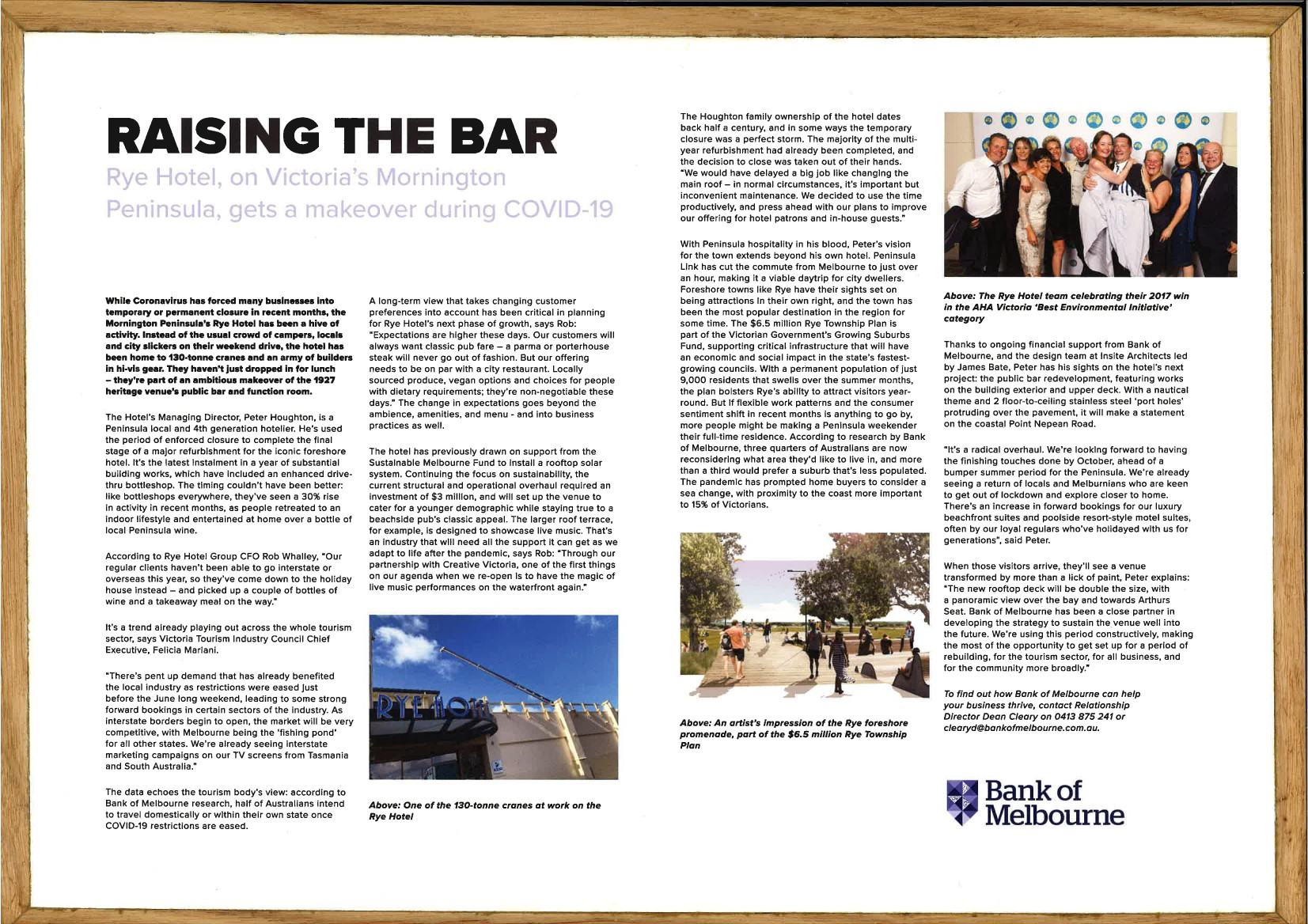 While Coronavirus has forced many businesses into temporary or permanent closure in recent months, the Mornington Peninsula’s Rye Hotel has been a hive of activity. Instead of the usual crowd of campers, locals and city slickers on their weekend drive, the hotel has been home to 130-tonne cranes and an army of builders in hi-vis gear. They haven’t just dropped in for lunch – they’re part of an ambitious makeover of the 1927 heritage venue’s public bar and function room.

The Hotel’s Managing Director, Peter Houghton, is a Peninsula local and 4th generation hotelier. He’s used the period of enforced closure to complete the final stage of a major refurbishment for the iconic foreshore hotel. It’s the latest instalment in a year of substantial building works, which have included an enhanced drive-thru bottleshop. The timing couldn’t have been better: like bottleshops everywhere, they’ve seen a 30% rise in activity in recent months, as people retreated to an indoor lifestyle and entertained at home over a bottle of local Peninsula wine. According to Rye Hotel Group CFO Rob Whalley, “Our regular clients haven’t been able to go interstate or overseas this year, so they’ve come down to the holiday house instead – and picked up a couple of bottles of wine and a takeaway meal on the way.”

It’s a trend playing out across the whole tourism sector, says Victoria Tourism Industry Council Chief Executive, Felicia Mariani. “There’s pent up demand that has already benefited the local industry as restrictions were eased just before the June long weekend, leading to some strong forward bookings in certain sectors of the industry. As interstate borders begin to open, the market will be very competitive, with Melbourne being the ‘fishing pond’ for all other states. We’re already seeing interstate marketing campaigns on our TV screens from Tasmania and South Australia.”

A long-term view that takes changing customer preferences into account has been critical in planning for Rye Hotel’s next phase of growth, says Rob: “Expectations are higher these days. Our customers will always want classic pub fare – a parma or porterhouse steak will never go out of fashion. But our offering needs to be on par with a city restaurant. Locally sourced produce, vegan options and choices for people with dietary requirements; they’re non-negotiable these days.” The change in expectations goes beyond the ambiance, amenities, and menu - and into business practices as well.

The hotel has previously drawn on support from the Sustainable Melbourne Fund to install a rooftop solar system. Continuing the focus on sustainability, the current structural and operational overhaul required an investment of $3 million, and will set up the venue to cater for a younger demographic while staying true to a beachside pub’s classic appeal. The larger roof terrace, for example, is designed to showcase live music. That’s an industry that will need all the support it can get as we adapt to life after the pandemic, says Rob: “Through our partnership with Creative Victoria, one of the first things on our agenda when we re-open is to have the magic of live music performances on the waterfront again.”

The Houghton family ownership of the hotel dates back half a century, and in some ways the temporary closure was a perfect storm. The majority of the multi-year refurbishment had already been completed, and the decision to close was taken out of their hands. “We would have delayed a big job like changing the main roof – in normal circumstances, it’s important but inconvenient maintenance. We decided to use the time productively, and press ahead with our plans to improve our offering for hotel patrons and in-house guests.”

With Peninsula hospitality in his blood, Peter’s vision for the town extends beyond his own hotel. Peninsula Link has cut the commute from Melbourne to just over an hour, making it a viable daytrip for city dwellers. Foreshore towns like Rye have their sights set on being attractions in their own right, and the town has been the most popular destination in the region for some time. The $6.5 million Rye Township Plan is part of the Victorian Government’s Growing Suburbs Fund, supporting critical infrastructure that will have an economic and social impact in the state’s fastest-growing councils. With a permanent population of just 9,000 residents that swells over the summer months, the plan bolsters Rye’s ability to attract visitors year-round. But if flexible work patterns and the consumer sentiment shift in recent months is anything to go by, more people might be making a Peninsula weekender their full-time residence. According to research by Bank of Melbourne, three quarters of Australians are now reconsidering what area they’d like to live in, and more than a third would prefer a suburb that’s less populated. COVID has promoted home buyers to consider a sea change, with proximity to the coast more important to 15% of Victorians.

Thanks to ongoing financial support from Bank of Melbourne, and the design team at Insite Architects led by James Bate, Peter has his sights on the hotel’s next project: the public bar redevelopment, featuring works on the building exterior and upper deck. With a nautical theme and 2 floor-to-ceiling stainless steel ‘port holes’ protruding over the pavement, it will make a statement on the coastal Point Nepean Road.

"It’s a radical overhaul and we’re looking forward to having the finishing touches done by October, ahead of a bumper summer period for the Peninsula. We’re already seeing a return of locals and Melburnians who are keen to get out of lockdown and explore closer to home. There’s an increase in forward bookings for our luxury beachfront suites and poolside resort-style motel suites, often by our loyal regulars who’ve holidayed with us for generations”, said Peter.

When they arrive, they’ll see a venue transformed by more than a lick of paint, Peter explains: "The new rooftop deck will be double the size, with a panoramic view over the bay and towards Arthurs Seat. Bank of Melbourne has been a close partner in developing the strategy to sustain the venue well into the future. We’re using this period constructively, making the most of the opportunity to get set up for a period of rebuilding, for the tourism sector, for all business, and for the community more broadly.”